In Vegas, Wizard of Oz can be found in all of the big casinos and most of the smaller ones too and there are quite a few versions available. The newer favorites include the Ruby Slippers game, Wicked Riches and the 3 reel versions.

When this game was first released, it blew people away with it's unique features. It really took slot machine gaming to a whole new level with so many new and unique features, including the sound effects.

The makers of Wizard of Oz slots describe it as a ’sensory immersion gaming experience’. Now, normally that sort of thing sounds like pure marketing speak, but in the case it really described the new game very well (back when it was released)

What I really enjoyed when I first played Wizard of Oz in Vegas was the gaming chair with Bose powered surround sound system. The chair even vibrates when something big happens during the game. Now, that sort of thing is common, but back in the day, this was 100% new. It was really popular too, sometimes it was really hard to get to play the game, even at 3am in the casinos!

As you would hope, all the characters appear in the WOZ slot, including the Lion, the Scarecrow, Dorothy herself, Glinda the good witch and of course, it wouldn't be complete without the Wizard himself.

You may or may not be lucky enough to meet the Wizard when you play the game, as he is only seen when you are getting one of the 'Big Wins' featured when you work your way up the Oz bonus rounds. 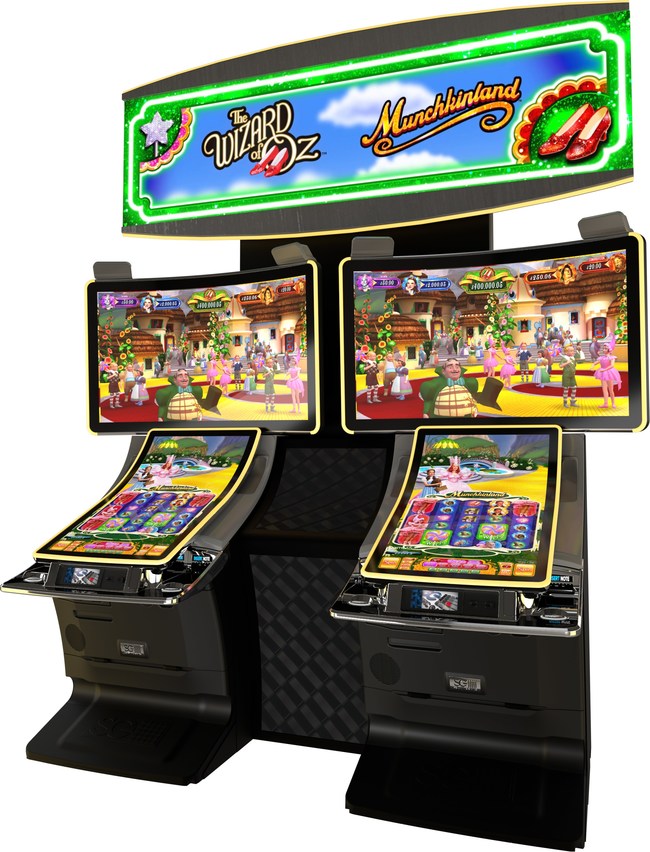 The Flying Monkey Bonus Round

What is really great about this game is the sheer variety of different bonus features and the fact that all of them can give huge rewards.

For example, there is the Flying Monkey Bonus where the monkeys fly around the screen and pull out symbols which turn into Wilds. If you are lucky, this feature can continue for some time and if they start to create a lot of wilds on the screen you are virtually guaranteed to get a really big win.

The Glinda (or is it Glenda?) appears at total random. I absolutely love it when this bonus is triggered, because when she is about to appear you get a vibration in the special seat and can hear a deep, low rumbling from the Bose speakers. At the same time, the reels start to spin a bit differently, creating an eerie feeling. At that moment, you know she will appear and it is so exciting!

When Glinda appears she waves her wand at the screen and one or two of the reels turns into stacked Wilds. However, if it is your day and luck is on your side, then she can turn the entire screen into Wilds. If that happens, you hit a super big win, which I think is around 10,000 times your bet. I am still waiting for that to happen to me :)

Other games from WMS include the famous Alice in Wonderland slots, which was almost as big a hit as the Wizard games when it was released, along with classics like Zeus and Kronos.

For something a bit different made by WMS, you could also try the gigantic reels games, which include Lil Red and also Spartacus, the game based on Gladiators - these games are really cool, with their unique game play.

Having landed the three Emerald city symbols, you’ll now pick one of the three to reveal either a cash win, the Emerald City Feature or the Winged Monkey Feature.

The Winged Monkey Feature is a free spins round where you’ll gain 8 spins. You’ll gain extra wilds during this feature as the winged monkey symbol is introduced on the middle reel, this symbol spreading wilds. The free spins can be re-activated.

This slot has 5 reels and 30 win lines, although should you wish to play fewer than 30 you can. To set your bet amount you can use two different options. The classic panel lets you select the number of lines and the coin size, while the quickbet panel shows you a series of boxes with the total stake labelled on them – you’ll click one and the spin will start.

All of the symbols pay out for landing three in a row or more from left right on a win line. The biggest payout comes when you land the Jackpot symbol five times in a row, where you’ll win 10,000 coins. This actually swamps every other symbol in terms of payout, with the Wizard of Oz logo and Dorothy coming in next and paying out 1,000 and 750 coins respectively. All of the other symbols pay out between 500 and 100 coins for five.

Vintage penny slot machines mills 1910. Glinda the good witch will appear randomly at times and grant a wish, where one or more reels will be turned completely wild.

This Wizard of Oz is one of the most watched movies of all time, so the onus was on WMS to come up with a slot that did justice to the movie. I think I can safely say they have. This slot does fill you with the joys of the film, transporting you to the magical Land of Oz This game comes alive with the features – particularly the Emerald City feature, where you’ll feel like you are on the journey with Dorothy, the scarecrow, the tin man and the lion, eventually meet the Wizard himself, winning cash prizes as you go. This slot will appeal to everyone, whether a fan of the film or not